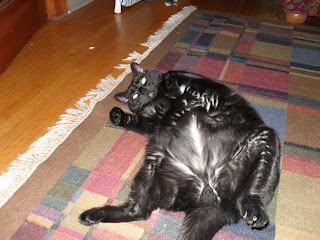 VOTE FOR MY CAT, LEO!
NOTE PHOTO: Full Disclosure!  You don't often get that from a candidate!
* Okay, he's not totally black.  He looks black, but as you can see from the picture, he seems to have a white under layer.  We believe he is a Smoke Cat, which is a rare fur colour mutation.  We are also unable to produce his birth certificate, but swear he was not born in Kenya.  He has also never had a massage; he hates having his belly touched.
at May 02, 2011 No comments: Links to this post