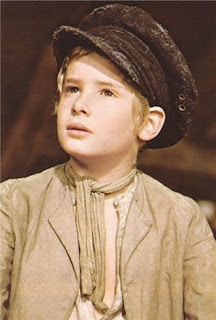 So Ice Prince and I have been hanging out for March Break.  You may wonder what we've been up to.  He plays a lot of video games. He's checkmated me at chess 9 times out of 10.  And we're writing a book!  It's going to be awesome. It's an ABC book about a mom who's telling her kid to go to sleep, but he keeps making noise and doing crazy things.  Do you think R is for Rastarfarians works? Oh and this afternoon we (by his request) will be playing Iron Chef.  The secret ingredient is.....ZUCCHINI!

So Ice Prince is 10 now and developing some major attitude.  Is it his teen hormones kicking in? What if he's a teen when I hit menopause? Maybe I could take his excess hormones to replace my depleting ones.  We could have a dialysis machine. Suppose that would work better with a girl teen...not sure I want testosterone, although maybe I might get a six pack. The only six pack I have right now can be returned for deposit.

Holy Cow P.S.!  Mark Lester portrayed Oliver in the movie from which the title of this post was taken. Well guess what!
"Lester was a close friend of Michael Jackson from 1982 until Jackson's death in 2009, and Jackson chose him to be godfather to the children. In August 2009, Lester gave an interview to the British tabloid newspaper News of the World, claiming that he could be the biological father of Paris Katherine Jackson, the late singer's daughter. Lester claimed to have been a sperm donor for Jackson in 1996, and announced that he was willing to take a paternity test to determine whether he was the father."

So Charlie Sheen has not yet responded to my intern application and yesterday was the deadline for his reply.  Guess it's back to banks and insurance companies for me.

Oh!  New internet sensation Rebecca Black's video Friday is making the rounds.  Have a listen. Oh, please do, it's worth it. It'll make you feel like it's 1985 again!  Now... do you think it's better than Robin Sparkles?  It's Video Smackdown!

This made me laugh. I think the sandwich was my favourite part.
http://www.bbc.co.uk/comedy/clips/p00dxtxf/misery_bear_misery_bear_goes_to_work/
at March 01, 2011 No comments: