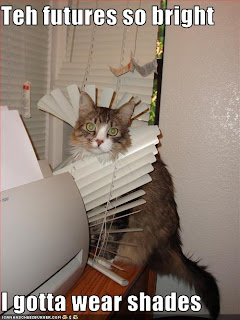 So it's 5:45.  Normally, I would be catching the first subway train to the cafe right now.  Instead, I'm watching Mary Tyler Moore reruns in my housecoat.  Don't worry, I won't become lazy and luxurious.  I'm heading in to the cafe around 8 am and I'll hang around a bit to make sure Silvia's doing alright.  Then I will be heading to Ice Prince's school to watch him compete in the public speaking finals!  This is amazing because:
1. I have the freedom to attend something in the middle of the day!
2. Ice Prince is excelling in public speaking! (Okay, to anyone who has met him, this is no surprise whatsoever. Getting him to STOP talking about stuff he loves would be an achievement.)
3. He actually wants me to go despite my ongoing threat to bring a foam finger.

5:55 am and I wold normally be turning on the ovens and mixing the muffins. And I'm sitting here in my housecoat watching Mary Tyler Moore. I'm going to turn on some coffee (yes, the same Reunion Island coffee, once you try it you can't go back).

It's raining outside, which I love. (Raining inside, not so much.)

I read in the Eye Weekly paper that a 39 year old elephant at the Toronto Zoo was euthanized because she had arthritis in her feet. If anyone from the Toronto Zoo asks about me, please pretend you haven't seen me. Thanks.
at February 28, 2011 No comments: Links to this post

So maybe you're here because you saw that the Cafe was closing and you wanted to keep in touch with me, Susan, as I ease back into civilian life.  Welcome!

I used to blog daily before we opened the cafe.  I'd lke to get back into it.

I am currently interviewing for jobs in Internal Communications Management, which is what I spent 10 years doing.  I've had two face to face interviews I am pretty psyched about, so we'll see how those pan out.

Feel free to dig around in the archives.  I'm a little verklempt. Talk amongst yourselves.
at February 03, 2011 1 comment: Links to this post